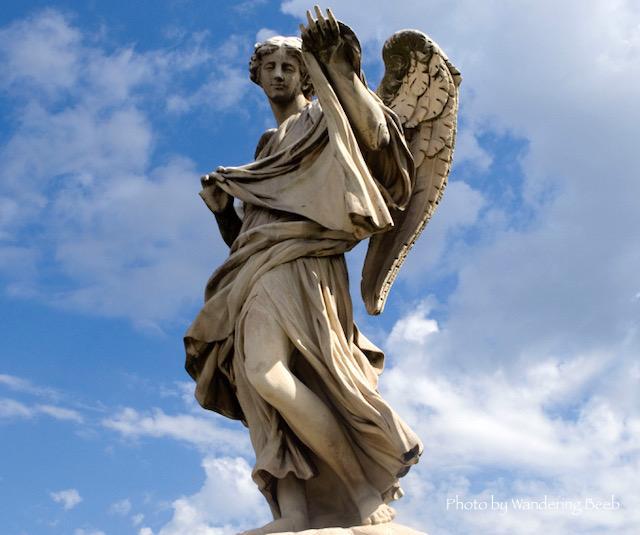 Angel with the Sudarium 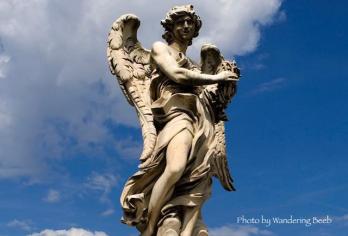 Angel with the Crown of Thorns

Angel with the Nails 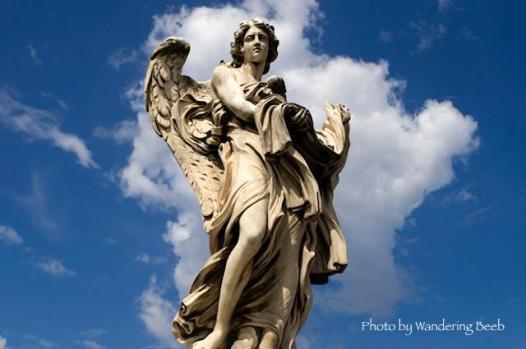 Angel with the Garment and Dice

Angel with the Superscription

If you watch Doctor Who, you’ll know that one of the most fearful enemies of the Doctor are the Weeping Angels (poor Amy Pond!). For those of you who don’t know what I’m on about, Weeping Angels are evil statues that move towards you when you aren’t looking, cast you back in time and feed off your energy. So you can imagine, as a bit of a Doctor Who fan, I was a little nervous heading down the pathway to Castel Sant’ Angelo, flanked by statues on every side.

Castel Sant’ Angelo (or Castle of the Holy Angel) was once used as a fortress, a prison, a mausoleum and an escape route for popes from the Vatican. It’s now a museum and, as Rome’s sights go, it’s probably not the most famous or the most alluring. However, I found the statue of the Angel high on the roof intriguing (too many Dan Brown novels) and the notorious history of the building swept us along for a quick visit.

The Bridge of Angels (or Ponte Sant’ Angelo) is made up of ten angels, all different and all stunning lining the walkway over the river Tiber. Wandering Beeb spent a huge amount of time getting just the right pictures of the Angels, helped out by sunny skies.

It was quite busy when we visited in Summer – if you want to get good photos without the additional tourists, it might be worth considering going along later in the year as the weather gets cooler. We have heard since that the bridge is beautiful at night and it is easy to imagine that the reflection of the lights on the water would be very picturesque. Our trip didn’t have time to visit at night but if we went back, I’m sure that it would be on the list.