When it comes to bears, most people have the same conflict – you want to see a bear in the wild but you don’t want to be mauled to death either! We were exactly the same –  in Yosemite, USA, and in BC and Alberta in Canada, we were keen to catch a glimpse of an elusive bear.

On our first days in Vancouver, we had set off for a trip up Grouse Mountain which has a Grizzly Bear habitat. We spent ages by the habitat, watching the two bears play together – this was a guaranteed bear sighting and we weren’t going to miss it! 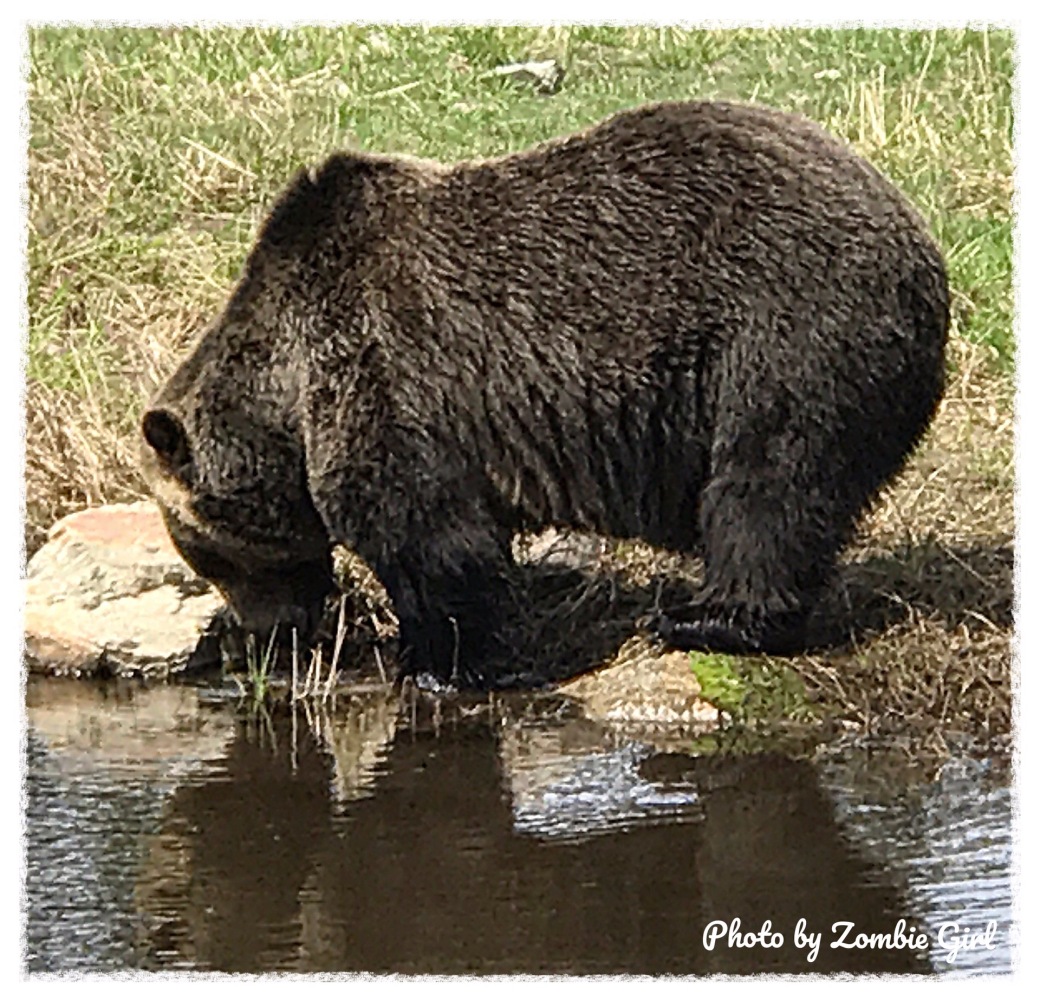 Hoping for more bear sightings of the wild variety, we booked on to a wildlife tour in Banff. We booked with Discover Banff Tours. A two hour twilight tour cost around $55 and they were excellent. The guide was really knowledgable and took us to a number of wildlife ‘hotspots’. They were in contact with lots of other tour guides and notified each other of sightings so that we had the best chance of spotting something. It was a great way of seeing some of Banff and we managed to spot some Elk and Mountain Goats fairly early on in the tour. 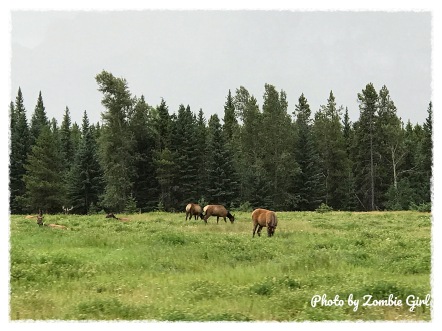 Half way down the road, we suddenly heard a shout from one of the other group members that they had spotted a bear! Lumbering off into the tree-line, we spotted a Cinnamon Bear (a type of black bear) and there was a great scrambling for cameras as people hustled to get a snap of this beautiful creature. This was one of those times where skills failed us and whilst I got a picture of the back of a friend’s head, Wandering Beeb managed to capture a shaky picture of the bear’s bum, along with the inside of the tour bus! Not the best bear sighting proof to bring back home!

Copying the route from the tour, we improvised the next night and headed to the same locations. Again, we spotted Elk and Goats, although no bears! 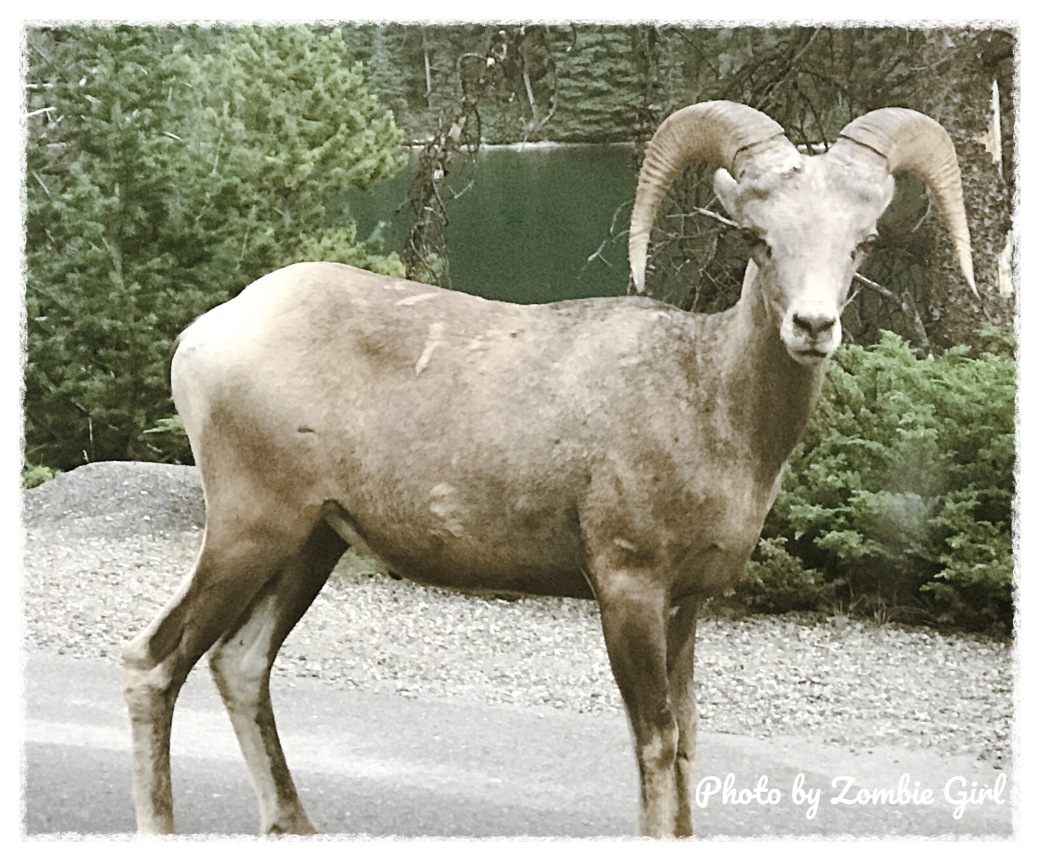 The first time we visited Canada, the custom’s officer did the usual ‘why are you visiting’ question. Excited to be in Canada and having sat through a very bumpy flight, we responded with “because we want to see bears!” The guy didn’t smile, didn’t laugh and gave us a very stern ‘I want a real answer’ type look. To be fair, most customs officers have been really friendly, but this trip definitely taught us not to be cute when trying to enter a new country – it’s not always well received!

During our time in Banff, our group spotted a total of five bears (including one Grizzly!), usually in the trees as we were driving past. Whilst in Banff, we heard stories of ‘The Boss’ and tales of aggressive bear behaviour in the park. The Boss is a dominant grizzly bear (he even has a serial number – Bear 122) who has eaten black bears and fathered a number of younger bears in the park. Another bear had been aggressive towards people in the park (usually dog walkers) and indeed some of the campgrounds had been closed when we visited due to bear behaviour. It was really interesting to hear from the Rangers about the need to carry bear spray as a deterrent to bears – both to stay safe and importantly, to ensure that bears receive negative reinforcement from their contact with humans, keeping them wild and alive.

The tour guide had told us about the frequency of which people spotted ‘stump bears’ – tree stumps that people mistook for bears. Our bear hunting was frequently punctuated by shouts of ‘bear!’ or ‘Stump bear!’ – making for interesting walks and car journeys!

When we had visited Yosemite a couple of years earlier, we had the experience of a baby bear happening upon us whist we were eating our sandwiches at Mirror Lake. It was later in the day and most of the bigger groups of walkers had disappeared. We had set ourselves up on a larger rock and started to munch through our snacks and butties. Most of us were facing in the same direction, but one of our eagle-eyed group pointed out a large, dark shape moving towards us. Quickly realising it was a bear and no one else was around, we started to pack up our things. It became clear that it was a younger bear and as amazed as we were, this probably meant that mummy bear was somewhere around. Respecting that bears are far more powerful than we will ever be, we all started to slowly back away, making a fair bit of noise to alert the bear to our presence. Astounded, we watched as the bear made its way across the path and into the trees on the other side. Despite the other bears we have seen, this encounter sticks in my mind like no other. The utter respect that the creature commanded was emphasised by the lack of other people around and the pack of food we were carrying. The grace and stealth that accompanied the bear’s movements made us realise that the granite cliffs and breathtaking tree-line were not the only wonders that we were lucky enough to see that day.

One thought on “Bear Territory”