I hate goldolas (or cable cars as we say in England). I hate everything about them – the swaying, the height, being packed into a small space with people who don’t seem to be bothered by them in the least, making exclamations about the scenery. If I’m suspended high in the air by a tiny cable, I really don’t want to know what’s out of the window! I think it comes from watching too much James Bond when I was little, but hay, I just don’t like the height. I do like the views from the top of whatever mountain the gondola is traveling up though and so, if there is no other way to ascend, I’ll grit my teeth and deal with it like a champ. 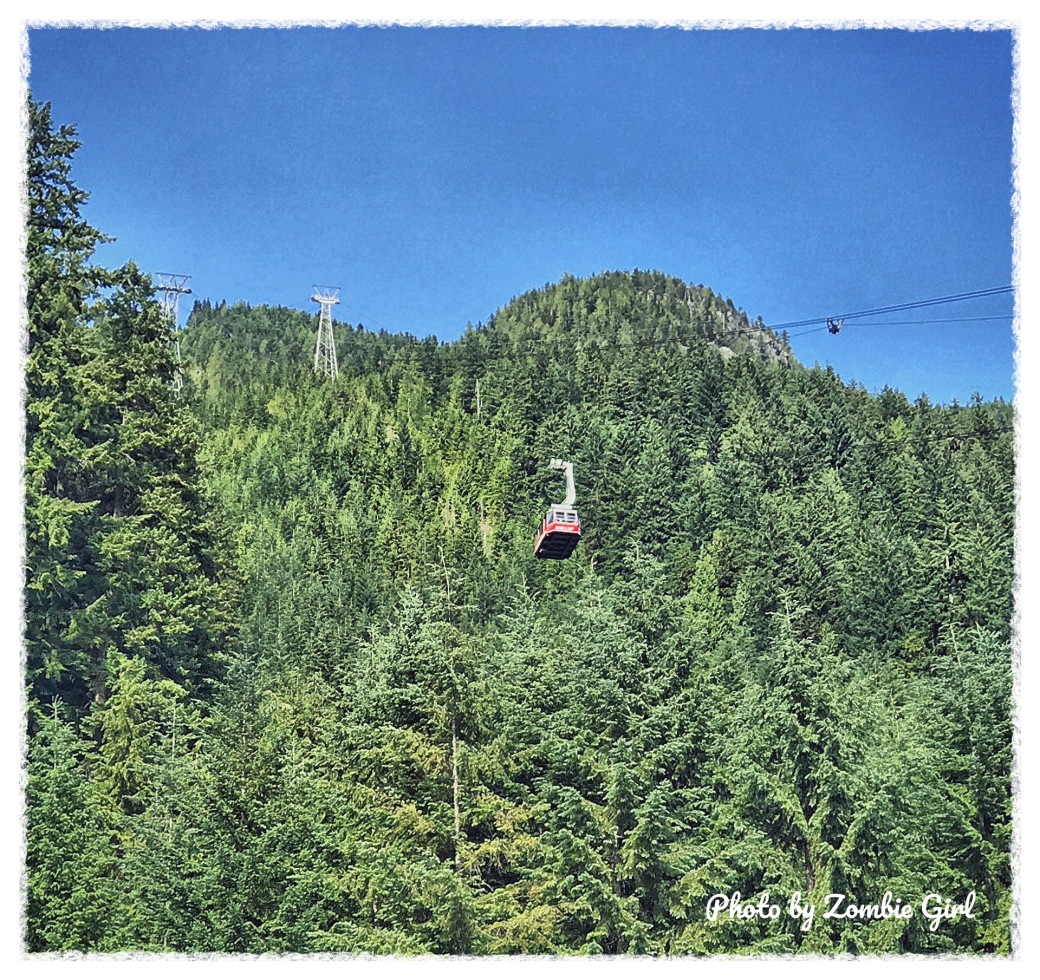 One of the worst gondolas I have been on is the one going up Grouse Mountain. Not because of the distance from the floor (I’ve been on higher), but because of the amount of sway the car produces. The first time I did this trip, I did it with a mate of mine who was really reassuring and supportive, until the car swayed and the horizon moved dizzyingly up and down. We both went pale and I think that we left hand prints in the metal pole we were holding on to. The second time, I knew to look at the floor and ignore everyone’s gasps as the car did its thing. When a whole cable car full of people makes an ‘ohhhhh’ sound, it’s not that reassuring! Interestingly, the car swings much more as it passes the last tower (nearest the top) – one to remember if you dread the swaying as much as me. Wandering Beeb was fine (that guy has no fear of heights or edges!). He was taking pictures and looking out of the window with no problems at all.

All that being said, Grouse Mountain is worth it. It’s probably a 30 minute bus ride from Canada Place in Vancouver (free shuttle with a day ticket, approx $40-60 depending on your ticket to Grouse Mountain). We have also done the trip via boat which I found much more enjoyable. It has everything for a full day’s adventure – grizzley bear habitat, ranger talks, lumberjack shows, hiking, panaramic views and bird shows.

We took a hike up to the peak to see the views and it was stunning to see Vancouver laid out in front of us. The weather was great and so our view was really clear. It was a little strange to see snow-capped mountains in the distance whilst catching sunburn (top tip – make sure you put on sunblock on whilst you are on the mountain, you will burn and burn fast!).

The lumberjack show is lots of fun (great for big adult kids and little kids alike) with the audience cheering on ‘their’ lumberjack as they take on log-rolling, climbing and sawing tasks. Although it’s very staged, you can still see the skill involved as they climb up hugely tall posts, using nothing but spikes and a short rope to hug the pole. A 45 minute show is a long time for the lumberjacks to keep the crowd entertained, but they play off the sense of danger excellently, turning every wobble, height and blade into a source of anticipation and excitement.

“There was a good balance of fun and nervousness throughout the show as ‘Jonny Nelson’ from the Green River Logging Camp and ‘Willie McGee’ from Blue Mountain battle through axe throwing, carving, climbing and log rolling, with some high jinx thrown in to encourage gasps from the audience” 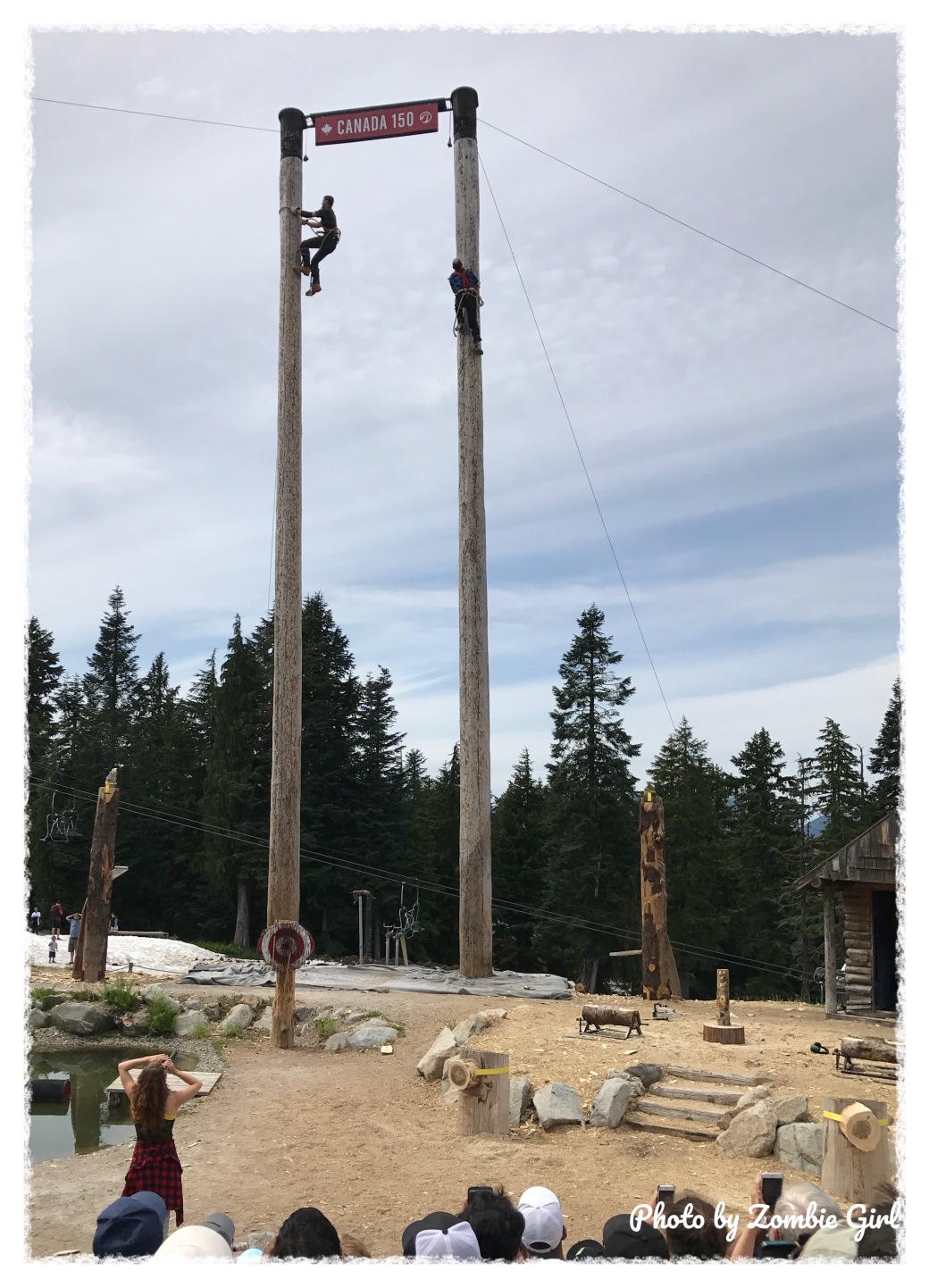 The bird show and bear habitat is one of the closest views you will get of these creatures (I certainly wouldn’t want to be that close to a bear in the wild) and we had some good reminders of the wildness of these animals as the birds decided to do their own thing and fly close enough to the audience to brush people’s hair as they passed. Check out our recent posts on bear spotting and the birds of Grouse Mountain.

Grouse Mountain is never going to be the most rural, ‘off the beaten track’ type of experience. It is a tourist attraction through and through, but it doesn’t pretend to be anything else and it’s a great day out of the City in a beautiful setting. Gondola and all, I loved it.

Tell us about your love /hate experiences with travel – what parts of a trip have you gritted your teeth through because you knew that it would be worth it once you reached your destination? Let us know in the comments!

5 thoughts on “Gondolas and Lumberjacks…oh my! ”